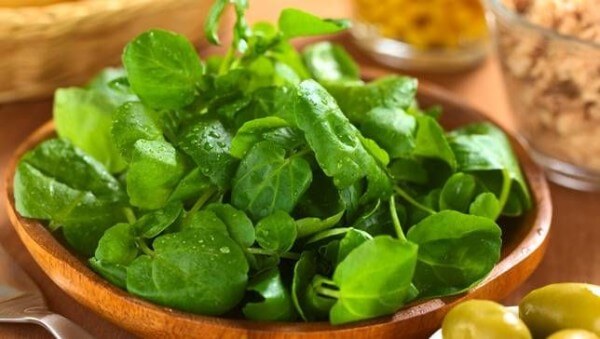 One of the woman volunteers managed to reduce her facial wrinkles by an whooping 39 percent.

The women ranged from 23 to 58 in age and began the study by having their faces photographed using a VISIA complexion analysis system which gives an intricate account of the individual’s skin, wrinkles, texture, pores, UV spots, brown spots, red areas and any inflammation.

After a month of eating 80g or a bag watercress a day the volunteers had their skin reevaluated by the VISIA camera, and the results were extremely different.

Most of the participants also reported an increased in their energy levels.

She said: ‘I’m absolutely thrilled with the results of the trial and astounded at how my skin has improved in almost every aspect.’

‘It feels smoother to touch, looks plumper and best of all my wrinkles have reduced! I had a particularly stressful few weeks at work and thought it would have a negative effect on my skin so to see such an improvement really is impressive.’

‘I have also felt more energised and generally healthier which has helped me deal with the stress. Watercress will certainly be top of my shopping list from now onwards.’

Dr Sarah Schenker, a leading dietician and nutritionist who oversaw the study, said: ‘Watercress is a rich source of beta carotene needed to quench free radicals, which can cause damage to skin cells.’

Sarah added: ‘This study confirms that diet is an important aspect of beauty. Eating plenty of plant foods including watercress cannot only help to slow down the ageing of our skin but may actually reverse some of the effects of damage.’

Watercress Alliance member Dr. Steve Rothwell, said: ‘We were delighted with the results of the new pilot study which may now be used to secure funding for a larger scale university research programme, as the findings have proved so conclusive.’