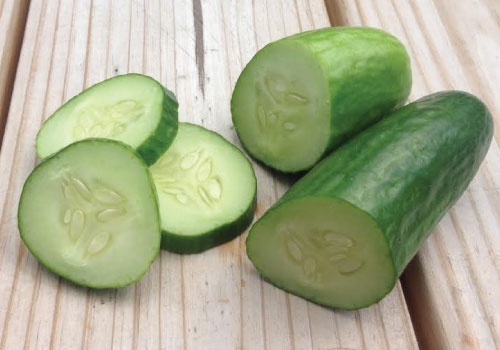 Cucumbers are the fourth most cultivated “vegetable” in the world. Mostly used and looked at as a vegetable, cucumber is technically a fruit that contains 90% water. Although the alkaline fruit is made up of so much fluid, it still manages to provide many beneficial health benefits. Cucumbers are known to be an excellent source of beneficial minerals including bone-building manganese, as well as potassium and magnesium, both good for your heart.

In India, cucumbers are traditional used as a natural medicine to treat headaches. Cucumber pulp is used as an acne cream, the seeds are used as a diuretic, and slices from fruit is used as a soothing remedy to tired, puffy eyes. As a result of these uses, many scientists have investigated the cucumber fruit, seeds, and extracts as an effective treatment in other areas of medicine.

Recent studies concluded that cucumbers contain powerful lignans that contribute to reducing risk of several cancers, including breast, uterus, ovarian, and prostate cancers. Phytonutrients in cucumbers called cucurbitacins are known to strongly prevent cancer cell from developing in the body.

In one study, cucumber extracts were found to provide phytonutrients that have free radical scavenging and analgesic activities, ultimately sweeping the body of toxins that cause cancer.

Cucurbitacins in cucumbers have already been proven scientifically as having anticancer activities. Still, another recent study discovered that cucurbitacin in cucumbers have strong inhibiting effects on cancer signaling pathways, which cancer cells need to survive and proliferate.